The Victorian Government prepares annual reports on the state's greenhouse gas emissions in accordance with the requirements of Victoria's Climate Change Act 2017.

The Climate Change Act 2017 establishes a target of net zero emissions by 2050.

The report is structured as follows:

Presents the trend in Victoria’s emissions over the period 1990 to 2018, Victoria’s contribution to national emissions, and Victorian emissions per capita and per unit of Gross State Product (GSP).

Per capita emissions in Australia and by State/Territory, 2018 Percentage change in real GSP and emissions intensity – Victoria, 1990 to 2018 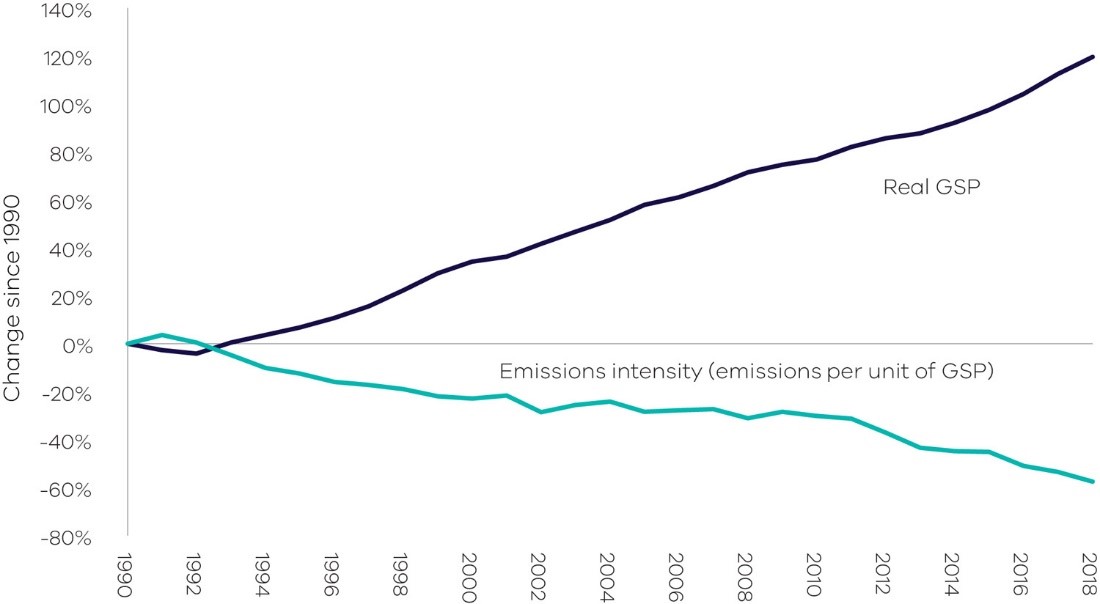 Presents Victoria's emissions by sector using Intergovernmental Panel on Climate Change (IPCC) sector categories. It describes historical trends in emissions in each sector and the key drivers of these trends. 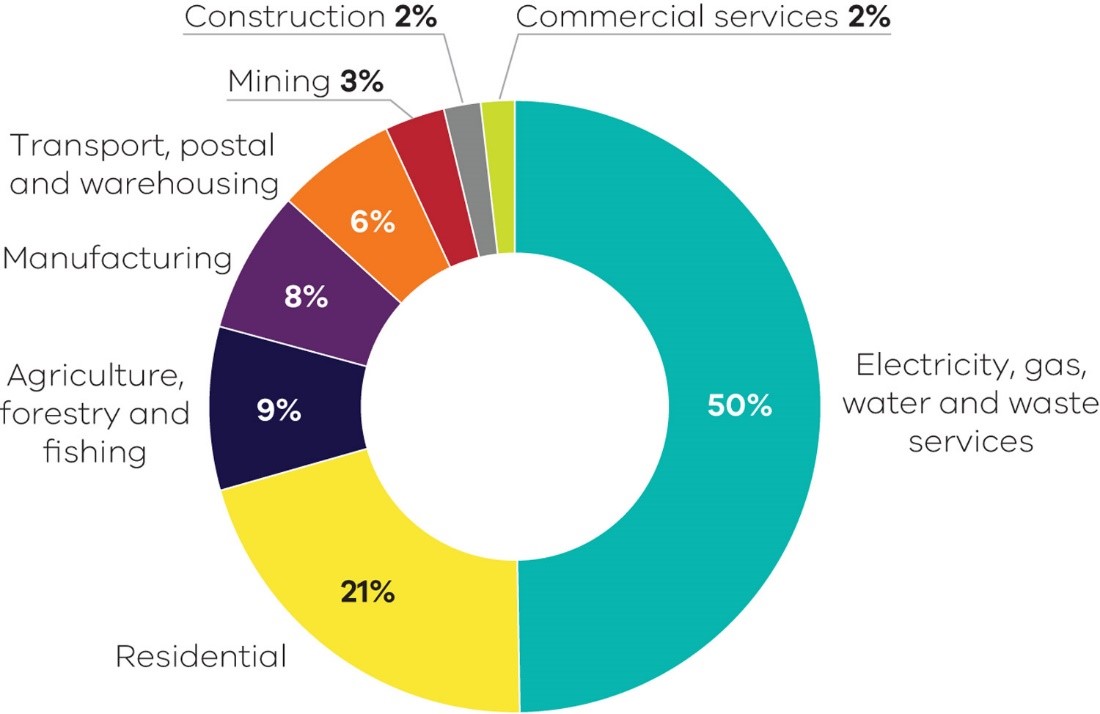 How are Victoria’s emissions tracking?

Key contributors to the reduction between 2005 and 2018 were electricity generation, which saw emissions fall by 17.1 million tonnes, and the Land Use, Land-Use Change and Forestry sector (LULUCF) which increased net sequestration by 6.7 million tonnes of carbon dioxide equivalent (Mt CO2-e).

Why does the latest report only include emissions data to 2018?

Because 2018 is the latest year for which official greenhouse gas emissions data is available.

Emissions data is prepared by the Commonwealth Department of Industry, Science, Energy and Resources. There is a lag of around 2 years due to the time required for data to be collated, analysed and reported.

How do Victoria’s emissions compare with the rest of Australia?

In 2018, Victoria contributed 19% of Australia’s total emissions. This placed Victoria as the third highest emitting jurisdiction behind QLD (32%) and NSW (25%).

Victoria’s per capita emissions of 15.8 tonnes of carbon dioxide equivalent (t CO2-e) in 2018 were less than the national average of 21.5, lower than the NT, WA, Queensland and NSW, but higher than Tasmania, the ACT and SA.

What are the sources of Victorian greenhouse gas emissions data?

Data for the report was sourced from State and Territory Greenhouse Gas Inventories and the Australian Greenhouse Emissions Information System database, both of which are prepared by the Commonwealth Department of Industry, Science, Energy and Resources. Both sources provide data at a state and territory level from 1990 to 2018.

Economic, population and sectoral statistics used in the report were obtained from sources including the Australian Bureau of Statistics, the Australian Energy Market Operator, and the Clean Energy Regulator. These statistics were used to calculate emissions intensity measures (such as emissions per capita) and to obtain insights into trends in Victoria’s emissions.

What are the main sources of Victoria's greenhouse gas emissions?

The report presents information on sectoral emissions in two forms:

Sectors defined according to the Intergovernmental Panel on Climate Change (IPCC) reporting framework with disaggregation in the energy sector.  The IPCC framework is the standard approach used globally by governments to compile official national greenhouse gas inventories. The sectors include:

Sectors of the economy categorised according to the Australian and New Zealand Standard Industrial Classification (ANZSIC). These sectors include:

Does the Victorian greenhouse gas emissions report include emissions associated with electricity generated interstate but consumed in Victoria?

No. The United Nations Framework Convention on Climate Change emissions reporting conventions require that emissions are reported in the geographic region where they are produced. Consequently, the 2018 greenhouse gas emissions report does not include the emissions associated with electricity that is generated interstate but imported into Victoria. Consistent with this approach, the report includes emissions arising from electricity that is generated in Victoria, but which is exported to other states.

Why has Land Use, Land-Use Change and Forestry data changed between the 2017 greenhouse gas emissions report and the 2018 report?

The Commonwealth Department of the Industry, Science, Energy and Resources prepares greenhouse gas emissions data in accordance with the United Nations Framework Convention on Climate Change reporting guidelines on greenhouse gas inventories and revises data annually to reflect improved estimation methods. These annual revisions result in changes to the modelling framework used to estimate emissions in the Land Use, Land-Use Change and Forestry sector. For consistency purposes, the full data series for the period since 1990 is revised when changes are made.

Why has the naming convention of the greenhouse gas report titles changed?

The naming convention of titles has been updated so that the year cited reflects the reporting year (new style) rather than the publishing year (previous style). Thus, the current Victorian Greenhouse Gas Emissions Report 2018 is published in 2020 but covers the 2018 reporting year.