Understanding the impacts of climate change on Victoria

Evidence is the best basis for decisions about the future Victoria’s climate has changed in recent decades, becoming warmer and drier. These changes are expected to continue. Understanding the drivers and impacts of these changes, as well as what we can expect in the future, will help us to plan and adapt.

Victoria's Climate Science Report 2019 brings together the latest climate change science knowledge gained from the Victorian Government's ongoing investment in climate science.
The report gives us valuable insights into how our climate is changing and what it means for Victoria’s future.

Victoria's climate varies from year to year and decade to decade due to the influence of large-scale climate drivers such as the El Niño Southern Oscillation. Long-term observed records show that Victoria’s climate is changing under the influence of both natural variability and global warming. 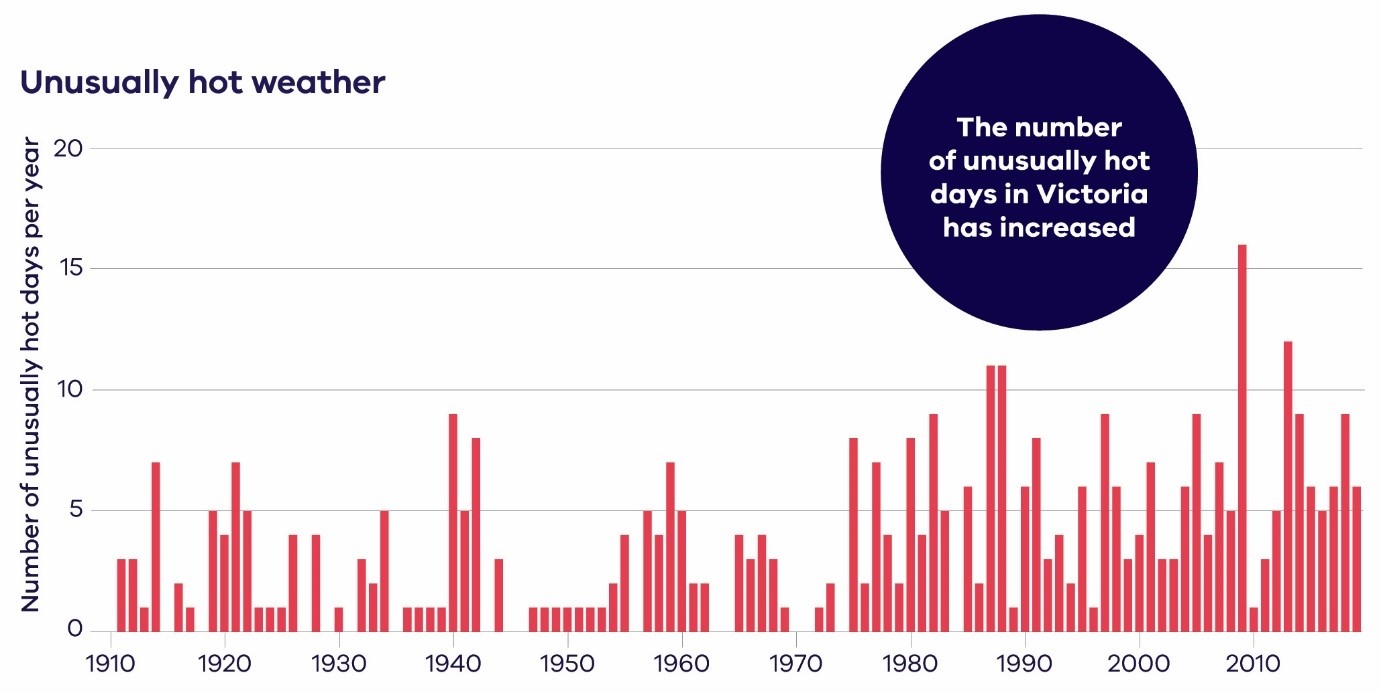 Figure shows days per year when the Victorian average temperature is ‘unusually hot’. Unusually hot days are those above the 99th percentile of each month from 1910 to April 2019 (BoM, 2019).

Extreme heat events already cost the Victorian economy on average $87 million a year, and this cost is projected to rise as heatwave events become more frequent.

The maps show how total rainfall over the past 30 years (1989–2019) for the given months compares to every 30-year period in the historical record. For example, decile 1 (very much below average) shows areas where rainfall over the past 30 years is in the lowest 10% of all such 30-year periods in the full range of long-term records back to 1900 (BoM, 2019). 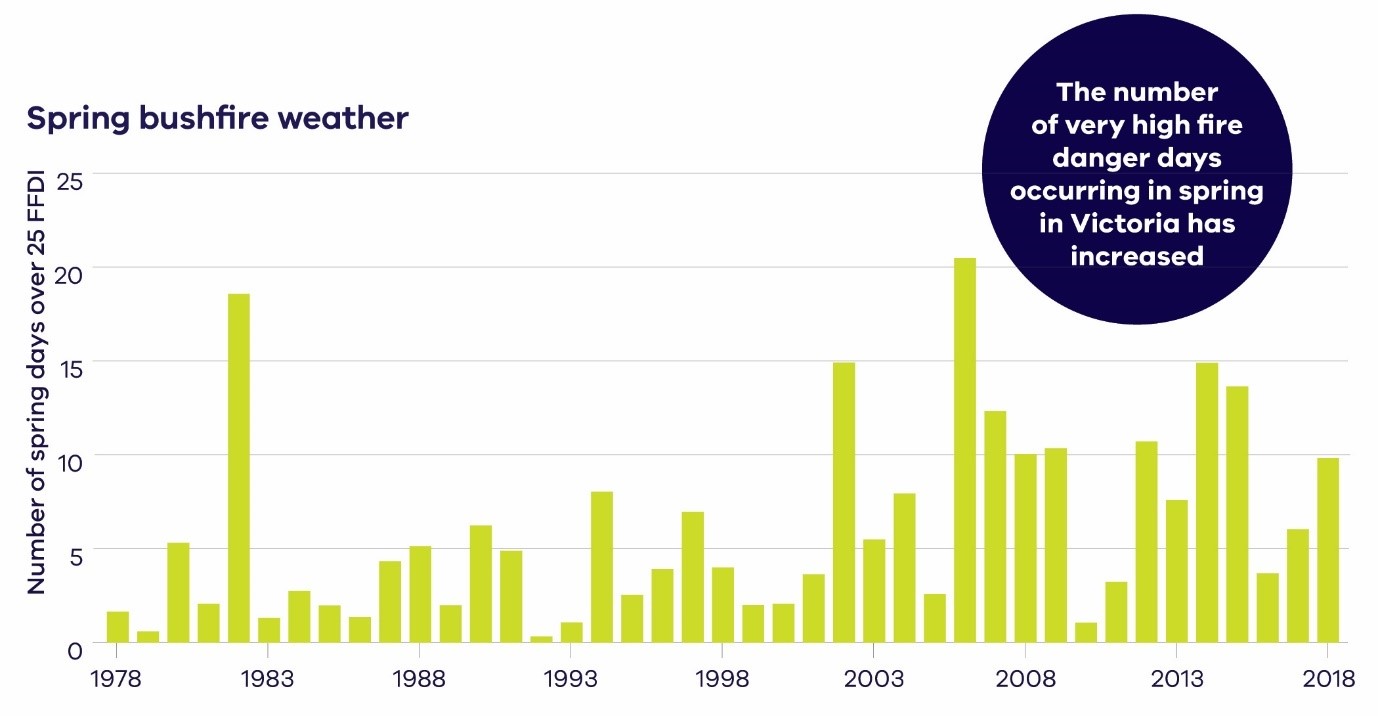 Climate models help us to understand our changing climate

Climate models help us to understand the changes that are already happening and provide guidance on the changes to come. Climate projections suggest that Victoria will continue to become warmer and drier in the future. Comparison of the observed average annual temperatures for Victoria with the projected range of change. Shown are observed temperature difference from 1961-1990 average (thin black line) plus the 10-year running average (thicker line) and the projected temperature change to 2030 across climate models and emissions scenarios (relative to a 1986–2005 baseline period). For more details on the method, see Grose et al. (2017b) (CSIRO, 2019). 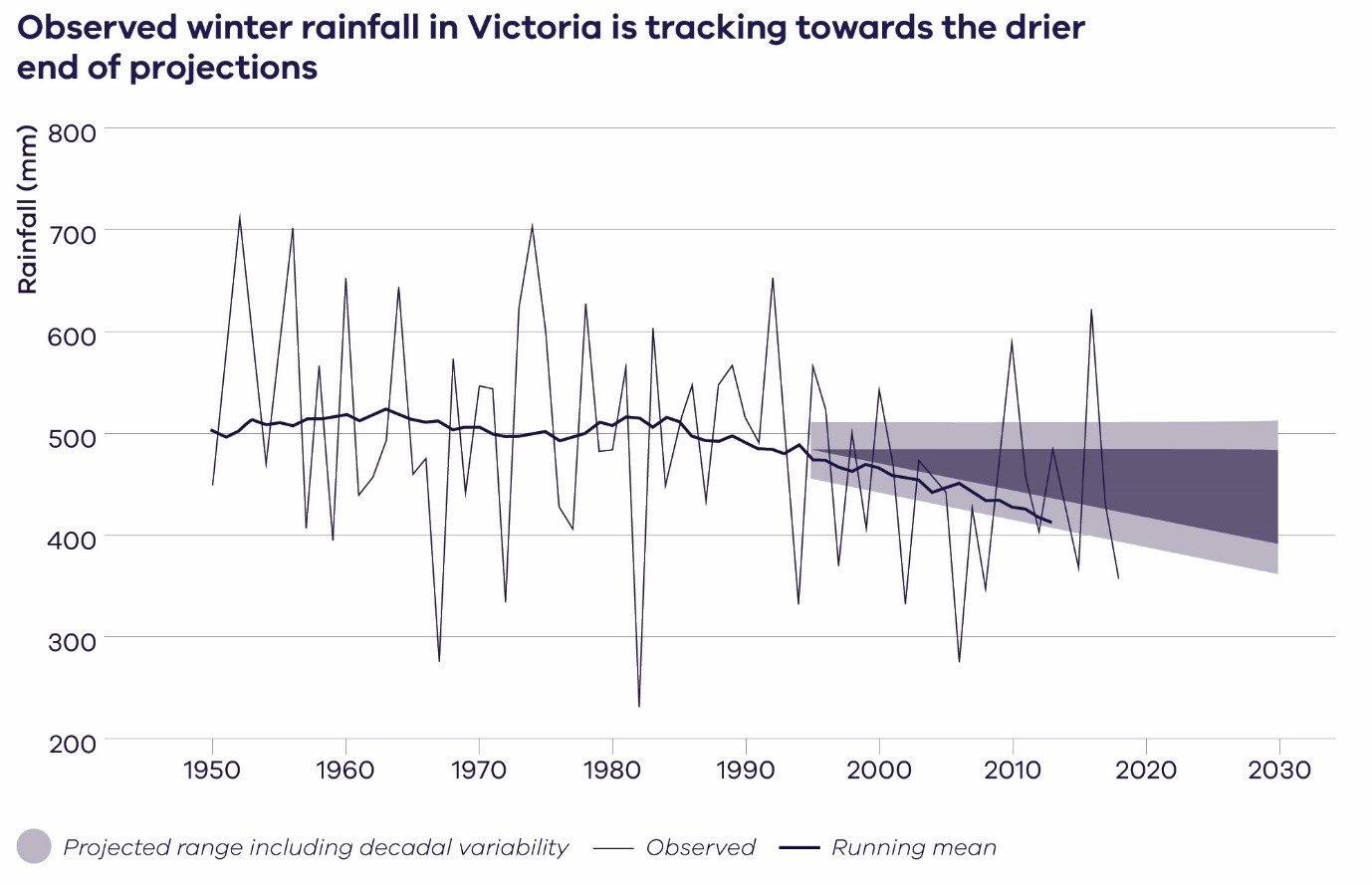 Victoria is expected to continue to get hotter and drier

Projections for Victoria indicate the state is likely to become hotter and drier in the future, but the timing and extent of changes will vary across regions.

Find out more about the impact of climate change on Victoria’s water resources through the Victorian Government’s climate science and hydrology research.

By the 2050s, if the current global warming rate continues, Victorian towns could experience around double the number of very hot days each year compared to the 1986–2005 average. 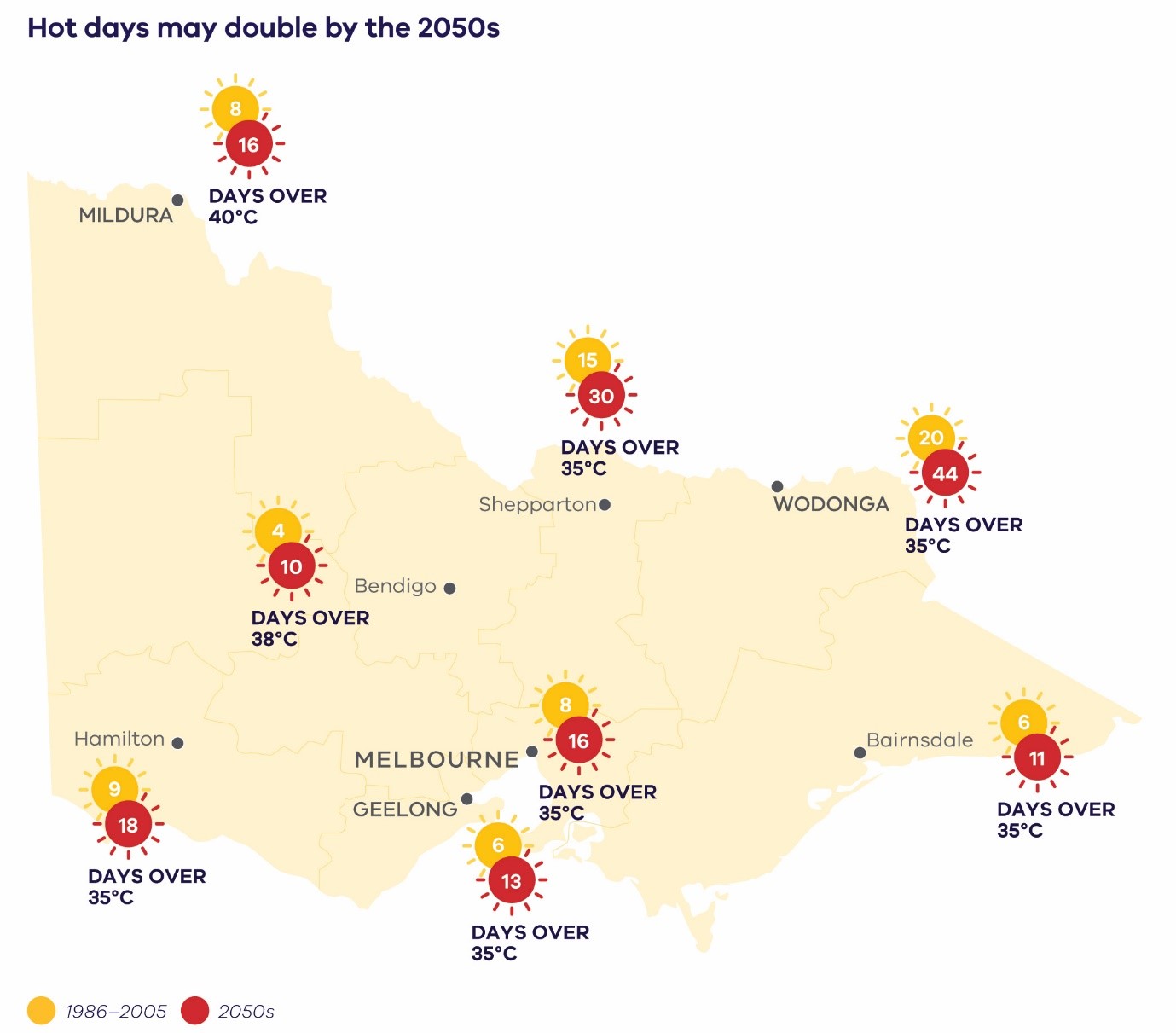 Annual rainfall is projected to decrease across the state, but when extreme rainfall events occur, they are likely to be more intense. Victorian alpine areas are projected to continue to experience declining snowfall (35–75% by the 2050s, under high emissions). The Potential Impact of Climate Change on Victorian Alpine Resorts Study

Find out more about the impact of climate change on Victoria’s water resources through the Victorian Government’s climate science and hydrology research.

Sea levels along the Victorian coast are also likely to continue to rise.

The Victorian Government partnered with CSIRO’s Climate Science Centre to produce local-scale projections data for Victoria out to the 2090s. Use Victoria's Future Climate Tool to explore future climate information for your local region and export climate data to use in your own spatial tools. To get information quickly, check out the regional summaries further down the page.

To learn more about the tool and how it can be used, check out:

This user guide was developed in collaboration with the Victorian Managed Insurance Authority (VMIA) to support the delivery of VMIA’s climate change risk management service.

This case study was developed in collaboration with Ambulance Victoria and VMIA to support the delivery of VMIA’s climate change risk management service.

Select your region to read a summary of what to expect of your local climate in the future.

To learn about the science and what it can tell us about Victoria’s climate, check out the following resources:

Agriculture Victoria has made a video titled Victoria's Climate 101 which explains the drivers of seasonal variability, observed trends and the latest climate change projections.