The Government will seek to reduce the state’s greenhouse gas emissions by 15 to 20 per cent (below 2005 levels) by the year 2020, setting Victoria on the path to net zero emissions by 2050. 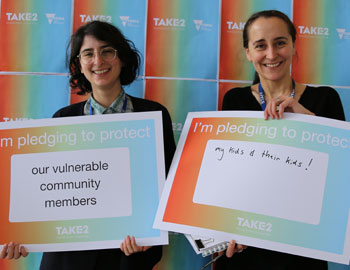 Actions by the Victorian Government, councils, business and individuals as part of Victoria’s TAKE2 climate change pledge program will contribute to meeting the new target.

DELWP and other government departments will reduce emissions from their operations by 30 per cent (below 2015 levels) by 2020.

Since its launch in June 2016, the TAKE2 program has received over 2,400 pledges in total, including:

See Victoria’s vision for a net zero emissions, climate-resilient Victoria – and how we will get there – in Victoria’s Climate Change Framework. A fence to exclude deer and protect an endangered wetland habitat has been constructed in north east Victoria following last summer’s devastating fires.

Victoria’s water corporations and catchment management authorities have been working hard to repair and replace essential water infrastructure and restore our waterways and catchments.

Authorities are reminding the community to follow advice and stay safe around coastal cliffs between Torquay and Aireys Inlet.